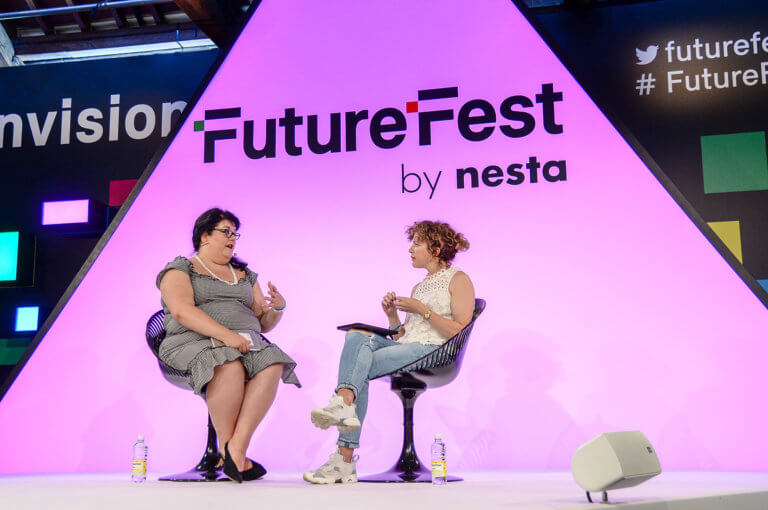 On 7 July Nesta’s FutureFest kicked off in London’s Tobacco Dock for two days of discussions, debates, performances and immersive experiences exploring alternative futures and innovative solutions to the challenges that lay ahead. Read more about our highlights from the festival.

Friday: Are you ready to occupy the future?

“All of us are shaped by the stories we tell about our past, our present and our future” were the words Geoff Mulgan, Nesta’s Chief Executive, used to launch the day. Geoff then shared updates on the current work Nesta is undertaking to make innovation accessible to anyone and everyone.

Akala then took to the Envision stage and asked a packed audience if Britain is having an identity crisis. Arguing that instead of a truly global vision for existing in the modern world, Britain seemed determined to retreat into little England nationalism.

Following Akala was Scotland’s First Minister Nicola Sturgeon who explored how governments can shape the future, raising environmental concerns as a key issue.

We know climate change is the greatest moral issue facing the planet. Taking action is an overwhelming moral imperative for developed nations like ours.
Nicola Sturgeon

The First Minister also announced the launch of ShareLab Scotland – a new fund to support projects that use collaborative digital platforms to tackle challenges around sustainable energy and transport – run in partnership with Nesta.

As well as rousing debates and inspiring talks, visitors also took part in a range of performances and experiences, including a real living garden in the depths of the venue. ‘The Garden’ created by London Glades is an immersive, multi-sensory journey reimagining our relationship with nature in the urban environment. Passing through a dystopian, barren landscape, to discover a forest glade full of trees, visitors were encouraged to rethink the way we live.

After a quick break for lunch, London’s Night Czar Amy Lamé and DJ Annie Mac shared their visions on how we can preserve night culture in our cities;. Nesta’s Eliza Easton and Jed Cinnamon explored future skills and what politicians, parents and schools can be doing to make sure young people are prepared for the future; and Geoff Mulgan discussed governance in the shadow of the smart machine with Sir Nick Clegg and Tabitha Goldstaub.

As machines get smarter, are our governments keeping pace? @geoffmulgan, @nick_clegg, @tabithagold discuss governing in the shadow of smart machines #FutureFest18 pic.twitter.com/AqB3iTjCzV

Meanwhile, in the Nesta Lounge, Nathan Elstub, Nesta’s Chief Investment Officer, explored the future of money, while John Loder, from Nesta’s Health Lab, spoke about his recent research into the future of healthcare, asking whether AI could play a role in making the health system more accessible, sustainable and responsive, or whether it runs the risk of becoming inhuman?

Still to come was Imogen Heap on stage, reimagining the future of the music industry, David Finnigan and Jordan Prosser returning with their immersive performance of ‘CrimeForce: LoveTeam’, Charles Leadbeater chairing a discussion on escaping from tech, and Ruby Wax exploring social connections in the digital age with Ziyad Marar and Julia Hobsbawm OBE.

From solving the mystery of consciousness to building public services on Mars, the second morning of FutureFest 2018 took us to places near and far. We kicked off the day with the charismatic musician and innovator Imogen Heap giving us a live demonstration of her Mi.Mu Gloves before introducing Mycelia’s new Creative Passport, a digital identity standard and hub connecting all musicians. Using blockchain, it has the potential to produce a fairer, more sustainable and more productive music industry.

The power of blockchain was also the subject of technologist and policy analyst Vinay Gupta‘s talk, where he shared how it could be used in solving global problems such as carbon emissions. ‘How blockchain can, literally, save the world’ not only highlighted the heightened knowledge and power technology can give us but the moral choices we must make as a result.

Meanwhile on the debate stage, our speakers discussed whether politics is broken and how we can fix it. The conversation around democracy and identity continued into the next session as we considered the new types of nationalisms.

"For me, the biggest problem with our political system is that it doesn’t see women." @SophieRunning in the "Is politics broken" debate at #FutureFest18 pic.twitter.com/X9o5QHSiBc

From envisioning a new generation of female inventors to what a more intersectional future internet might look like, diversity and collaboration in technology has been a hot topic. Inspired by the original female of science-fiction, Mary Shelley, the Future Frankenstein I: icons & iconoclasts session also explored if new movements in science and research could be a democratising force for good or a reason to be fearful.

@laurakalbag on inclusive design @nesta_uk's #futurefest18: “all of this technology is made by rich, cis, straight, white men, and the thing is that they’re not vulnerable to the same things that the rest of the marginalised communities are" #inclusivity #design #tech

Whether gambling their data in our casino with a difference or dancing with robots, our visiting future-shapers had the opportunity to experience what a relationship with technology might look like.

It was writer, documentarian, and lecturer Douglas Rushkoff who got to the heart of the matter though; championing human connection – ‘Team Human’ – in a digital world.

The digital has gone from being a connector to being a divider…Humanity is not the problem, it is the solution. Douglas Rushkoff

Indeed when we fully understand human consciousness – our physical reality – it could transform the virtual realities scientists are trying to create through technology explained artist and professor, Rebecca Allen in ‘The tangle of mind and matter’.

From the mind to Mars, we explored whether we would be able to coexist with aliens and, using Nesta’s work on New Operating Models for Public Services, how we would go about building public services. We were still back in time for lunch with Michelin-starred chef, Nurdin Topham, for a talk on urban foraging, the movement reconnecting city-dwellers with their natural environment and offering fresh new flavours.

Ruby Wax OBE continued with the theme of human connection, reminding us that we are imperfect creatures with millennia of evolutionary baggage, and that to survive we needed to upgrade our brains as well as our technologies. A big part of this was practising compassion for ourselves and others.

Fix yourself first, then go and save the world Ruby Wax

Ruby was joined by Ziyad Marar who talked about the hypocritical judgements we make of others while feeling judged ourselves, and Julia Hobsbawm OBE who spoke about the irony of feeling disconnected from reality in an allegedly connected era, and the importance of what she described as social health.

Aral Balkan was critical of surveillance capitalism as seen in the ‘Trojan horse’ gifted to humanity by Silicon Valley and its venture capitalists, proposing instead an ethical model of tech for the commons funded by the commons.

I think the future belongs to those with idealism and who can imagine possibly a very technologically advanced society, but one based on eternal human themes… that you can’t bypass through the internet or technology. Those deeper human needs will outlast technologies. Angela Nagle